Home » government » Are We Slaves?

A recent blog by Chris Sullivan has made me revisit this topic which I have discussed a number of times on the various debate forums which I frequent.  This time I felt the need to dive in a bit more in-depth in the form of this missive.

The common adage is that America is the “Land of the Free”, but is this truly the case?  In the wise words of Voltaire, “If you wish to converse with me, define your terms.”  Therefore, before we are able to answer this question we must first define the terms we are attempting to discuss.
We are provided with the following definitions by Black’s Law Dictionary, 8th Ed.:
Freedom: 1:  The state of being free or liberated.
Slavery:  1:  A situation in which one person has absolute power over the life, fortune, and liberty of another.  2:  The practice of keeping individuals in such a state of bondage or servitude.

These definitions are still somewhat vague and ambiguous for our purposes so I will attempt to more positively define these terms for use within this paper in an attempt to satisfy the “all and only” test as espoused by the Classical Theory of Definition.

“Freedom is the ability to perform, without reprisal, any action which does not negatively impact another individual.”

Therefore, in order to have freedom—the definiendum—one must be able to act as one desires—the definiens—so long as he does not encroach upon another’s freedom.  Or as John Locke put it, “Being all equal and independent, no one ought to harm another in his life, health, liberty, or possessions.”  But in order for this definition to be suitable, it must pass the “all and only” test.  The definiens should apply to ALL possible instances of the definiendum and ONLY to those instances.

Can a person act as he desires without having freedom?  Certainly; we can readily see this in instances of slave uprisings throughout history.  But can that person act as he desires without reprisal lacking freedom?  The answer is a resounding no.  Then again, a person may not act as he desires even with freedom without reprisal for certain actions.  This is why I have included the limitation to only those actions which may be performed without negatively intruding upon another person’s property.  As such, I believe this to be a reasonably agreeable definition of freedom.

“Slavery is the state of being unable to act peaceably without reprisal from entities which are unharmed by these actions.”

I will admit that at first glance this is a rather unorthodox definition of slavery.  However, I believe that you will discover this definition to include they typical conception of slavery as well as those states which are not readily acknowledged as such.

The typical American notion of slavery is the African man on a Southern plantation.  These men (for those who are new to my blogs, I use the masculine terms generically for all mankind) were unable to act in virtually any manner of their own choosing without explicit permission from their masters.  As you can see, my definition is quite applicable to orthodox slavery.

The story of Rapunzel, locked in a tower and unable to leave, is not often viewed as one of slavery, but is obviously such a case.  Those unfortunate enough to be kidnapped are victims of slavery.  We could even consider children to be in a state of slavery, although the morality of allowing a child to inadvertently hurt themselves through ignorance is often a strong defense of this practice (and is a debate unto itself).

This brings us to the age-old question of state coercion:  Is a person born into a system which regulates human action via coercion subject to slavery?

Let us first consider a few of the more mundane aspects of life within a state.  The vast majority of man must commute at least a short distance to their place of employment/work with the preferred method of transportation being the automobile.  The state has claimed authority to declare who can and cannot legally use these routes of travel.  The most common rationale for this being the construction and maintenance of these roads with taxpayer money.  This seems to be akin to restricting the African slave’s freedom by justification of using personal money to purchase said slave.  Regardless, the fact is that a person who operates a vehicle on a public road is liable to coercive response by the state regardless of whether he injures another person.

Ignoring licensing, a person does not have the privilege to choose to drive without a seatbelt or ride a motorcycle without a helmet in most states.  The clear victim in these instances is the driver himself, yet the voluntary exercise of using these safety devices does not exist.

The speed at which he may drive is dictated to him.  A man could be on a completely deserted highway in the middle of the desert and receive a speeding ticket or worse.  Why?  Whose safety beyond his own was he putting at risk?  What allegedly scientific process was used to develop the so-called “speed limit” anyway?

The times in which he may turn or proceed through intersections are virtually always dictated to him.  How many times have you sat at a deserted intersection waiting for the light to turn green?  It could be three o’clock in the morning with not a soul in sight, but if a cop catches you running a red light—even after performing due diligence and scanning for conflicting traffic—you will receive a citation.  Virtually every left turn lane in the middle of a block is devoid of a traffic light which forces the responsibility of traffic avoidance on the turning driving, yet how many intersections have red turn arrows preventing a person from making an identical decision?

I acknowledge that these are minor events and I chose them for precisely that reason.  People take these things for granted.  The proverbial, “it’s always been done that way.”  When you remove the requirement for a person to think for himself you have effectively created a timid and acquiescent slave.

Which brings me back to someone who knew a thing or two about slavery, Frederick Douglass.  In 1845, he wrote a brief history of his life and explained the horrors experienced as a slave in the United States.  The truly great works of literature span the test of time and are equally applicable to all men across the face of the earth.  This, I believe, is one of those works.  Despite his lack of a typical education, his wise and profound observations continue to be relevant to society.

He first noticed that most people do not admit to or realize the actions upon slaves.  “So profoundly ignorant of the nature of slavery are many persons, that they are stubbornly incredulous whenever they read or listen to any recital of the cruelties which are daily inflicted on its victims.”  While most media outlets are admittedly hesitant to publish accounts of state abuse, there is no lack of evidence against the atrocities committed by the various states across the globe.  Take Wikileaks and Bradley Manning for instance.  Most Americans view Wikileaks as a vile and dangerous outlet despite the damning evidence against the state it has released.  And unfortunately for Bradley Manning, those people who even know who he is are likely to declare him traitorous and deserving of wicked punishment even though his actions are in line with the military regulations based upon the very Constitution he was sworn to uphold.

Mr. Douglass goes on to explain how the very real threat of reprisal was incentive enough for the slaves to speak, and even think in some cases, highly of their masters.  The slaves would defend their master’s actions even to the point of violence, despite the fact that they were being held captive against their will.  He explains how one particular slave unknowingly told his master how poorly he was treated and was subsequently sold, a punishment “more unrelenting than death.”

“This is the penalty of telling the truth, of telling the simple truth, in answer to a series of plain questions.  It is partly in consequence of such facts, that slaves, when inquired of as to their condition and the character of their masters, almost universally say they are contented, and that their masters are kind. The slaveholders have been known to send in spies among their slaves, to ascertain their views and feelings in regard to their condition. The frequency of this has had the effect to establish among the slaves the maxim, that a still tongue makes a wise head. They suppress the truth rather than take the consequences of telling it, and in so doing prove themselves a part of the human family. If they have any thing to say of their masters, it is generally in their masters’ favor, especially when speaking to an untried man.”

Why are the most popular storybooks filled with heroic epics of underdogs who fight against tyranny and injustice, yet those who desire an end to injustice and tyranny in the United States viewed as traitors?  Why do the people of the United States celebrate people such as the incredibly brave and heroic man who defiantly stood in front of a long line of Chinese tanks in Tiananmen Square, while people such as Adam Kokesh are ridiculed as unpatriotic and traitorous? 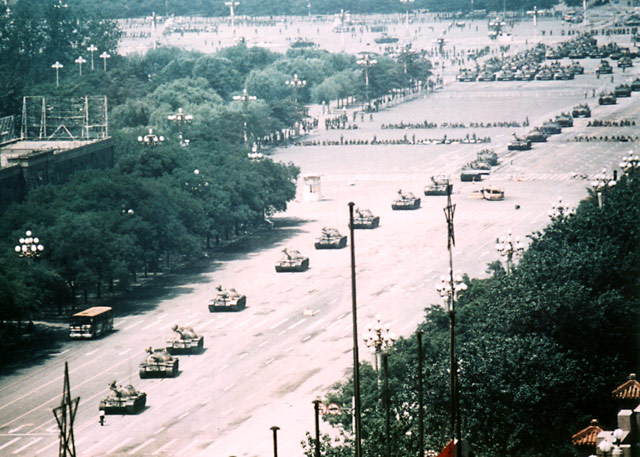 Could the answer perhaps be due to the fact that people are “[s]o profoundly ignorant of the nature of slavery” that they are unable to recognize the truth that they are, in fact, slaves themselves?

This site uses Akismet to reduce spam. Learn how your comment data is processed.